Pearl Burris-Floyd, of Dallas, NC, was appointed by the North Carolina General Assembly in 2015 and reappointed in 2019 to serve on the Board of Governors of the University of North Carolina System. Her term will end in 2023.

Burris-Floyd is currently the secretary for the Board of Governors and serves on the University Governance Committee and as secretary on the Historically Minority-Serving Institutions Committee.

Burris-Floyd has spent the majority of her professional career providing leadership on health issues and speaking on matters that involve mental and behavioral care. She is the Chief Government Affairs Officer at Partners Behavioral Health and President and CEO of Hidden Gemstones Consulting, LLC. She has worked as a Cancer Detection Specialist and held several administrative positions, including one at the Department of Health and Human Services.

Burris-Floyd is a passionate public servant. She was the first African-American elected to the Gaston County Board of Commissioners, serving as the Vice Chair from 2006-08. In 2008, she was elected to the NC House of Representatives District 110. She served as a State Representative from 2009-11. Burris-Floyd has served on committees on aging, appropriations, education, election law and campaign finance reform, and health and mental health reform.

Burris-Floyd has also served on various boards, including the Gaston County Board of Health, Pathways Mental Health Board of Directors of Cleveland, Lincoln and Gaston Counties, the NC Association of County Commissioners, NC Insurance Pool, and CaroMont Health. She was appointed by Gov. Beverly Perdue to serve as a member of the State Board of Directors for the Partnership for Children in 2011 and reappointed to this board by Gov. Pat McCrory in 2014.

She is the 2009 recipient of the Healthcare Hero Award from The Mecklenburg Times and received the 2011 Circle of Excellence Award from Novant Healthcare System.

Burris-Floyd's service to the community is rooted in her faith. She is an ordained minister and member of the First Baptist Church in Dallas, NC, where she currently serves as the Chair of the Board of Trustees. She is a motivational speaker and has offered keynote addresses at health care forums, women's empowerment conferences, and leadership retreats.

Her advice to today's college students:

"Set goals and work hard to achieve them. Then once you achieve these goals, set new goals. It's important that you remain committed to life-long learning." 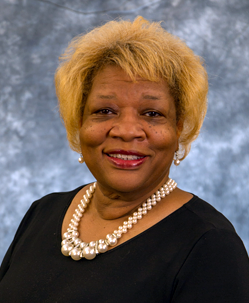