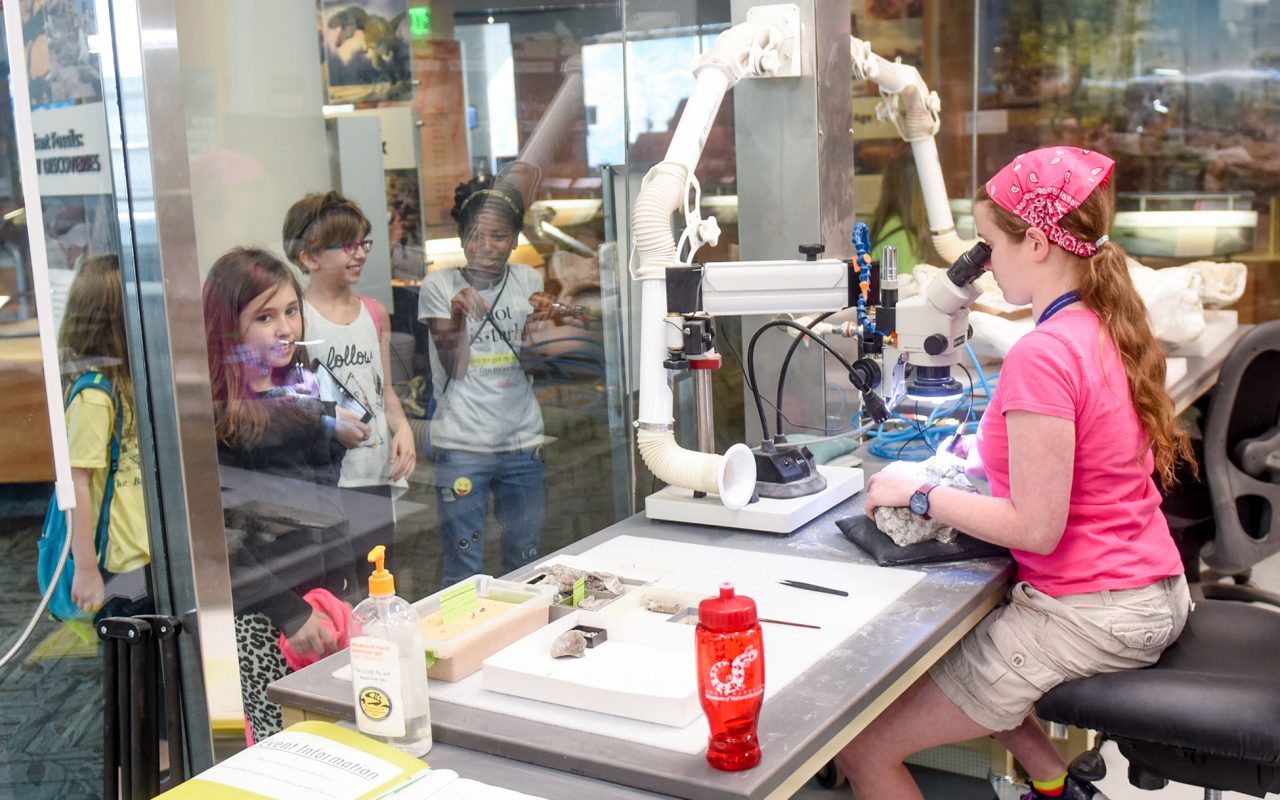 For Jim Johnson, it’s one thing to discuss paleontology with his eighth grade science class at Lucas Middle School in Durham. It’s quite another for him to show his students actual paleontologists at work.

On a field trip to the North Carolina Museum of Natural Sciences, Johnson’s lessons go beyond watching videos and showing his students fossils. Because of a unique partnership between the museum and the University of North Carolina, students can observe faculty members and university students conducting their research work, and can often interact to ask questions.

“When they look at actual paleontologists, it brings to life what I’m telling them in the classroom,” Johnson said. “It adds to the hands-on experience. They see the work that can be done and what they could be doing in a few years.”

One of his students, Jamie Robinson, said the museum trip made her want to switch career goals, from being a neo-natal nurse to conducting research as a marine biologist.

“The researchers looked like they really had a fun and interesting job,” she said. “The paleontologist explained what she was doing, so that was cool.”

Jason Cryan, the museum’s deputy director and chief of Research and Collections, said the partnership between the University and the museum first came about after a conversation between former President Erskine Bowles and former museum executive director Betsy Bennett.

“They put their heads together and tried to conceive of a new kind of position that would create a partnership between the UNC system and the museum,” he said.

The partnership was formalized about five years ago when the museum opened its Nature Research Center wing, which included glass walled labs where members of the public could observe faculty and student researchers.

The appointments cover a broad range of disciplines, including paleontology, history and astronomy. In addition, the faculty members conduct demonstrations and give lectures to museum visitors. With more than 900,000 visitors a year, the Museum of Natural Sciences is the best-attended museum in North Carolina, according to Cryan.

“The ‘fish bowl labs’ give the public a chance to see scientists do what they do,” Cryan said. “It fosters public outreach of the sciences.”

Roland Kays, who is jointly appointed as an associate professor in the Department of Forestry and Natural Resources at NC State as well and as Head director of the Biodiversity Research& Earth Observation Lab at the Museum, said it’s a great arrangement for him.

“People can look into our labs and see what we’re doing,” he said. “They can talk to us with microphones. A lot of times, we’ll do events with visitors where they are involved with the research.”

Kays said he’s not bothered by being on display at the museum.

“I like involving the public,” he said. “After a while, you stop noticing them. But you also wave and say hi.”

Brandon McDonald, an NC State junior zoology major from Charlotte, said being on display took a little getting used to at first.

“It’s a really interesting experience getting to work at the museum, because you get to go to other parts that aren’t open to the public,” he said. “It was a little strange at first having people look at you, but I really think that’s cool now. Interaction is a big part of working here.”

Rachel Smith, an assistant professor in the Appalachian State Department of Physics and Astronomy, serves as director head of the museum’s Astronomy & Astrophysics Research space observation lab. She said female visitors who see women working in the labs can often be inspired to pursue STEM-related fields.

“Oftentimes, I’m interviewed for students’ reports about women and careers in science,” she said. “Appalachian State is a bit unusual because we have a lot of women in the department, and the students will say to me that it’s nice to see so many women. I think it’s inspiring to the students.”

Smith said her position at the museum means that she often has several internship opportunities, giving the students valuable experience with a different side of academia.

McDonald noted before he started working at the museum, he didn’t really think it fit with his future plans. Now, once he goes to grad school, he hopes museum work is part of his future.

“I’m really leaning toward working in a museum,” he said. “I think it will help with my different goals. It’s been a great experience – I’m glad I had the opportunity to work here.”

The museum experience can be an equally inspiring place for younger students as well.

“Seeing us work gives them more career choices,” Johnson said. “Some of these kids have never even thought about a career in science, but getting to see it up close gives them an idea about it. When you can apply a lesson to the real world – that’s what teaching is all about.”