From the ground up: NASA career helps alum inspire others 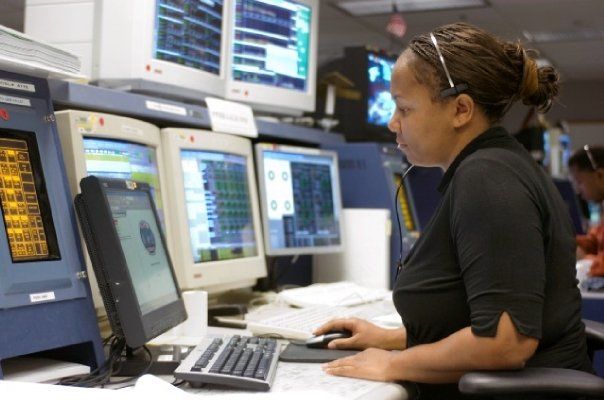 Joeletta Patrick crested a small hill on Saturn Boulevard at NASA’s Johnson Space Center in Houston, Texas, to a sight that changed her life. There in the near distance, like a giant at rest, lay a Saturn V rocket — the tallest, heaviest and most powerful rocket system ever. The first humans to walk on the moon flew aboard one into space.

“That beauty was sitting right there on the lawn,” Joeletta says. “That was the moment where I was like, ‘Oh my God! This is NASA! This is the real, real NASA!'”

That she was even interviewing with a NASA contractor on that day in 1997 was a bit of a shock for the recent college graduate. The opportunity to work on America’s space program had sprung from a spur-of-the-moment decision in the career services office at North Carolina A&T State University.

Joeletta had earned her degree in electrical engineering but never considered such a path to be possible for someone like her, the daughter of a sharecropper mother who’d had to trade school for the tobacco and cotton fields. That drive on the boulevard led the North Carolina School of Science and Mathematics Class of 1992 graduate into a career of more than 20 years working with the space agency, where she has been a flight controller for the International Space Station and is now the leader of a major educational outreach operation.

A space-focused career trajectory may not have been an early ambition for Joeletta, but “I fell into it,” she says. “There was always a curiosity. I liked putting things together. I was a ‘fix it’ type of girl. If something wasn’t working, I would look to see how I could get it to work.

“It might be what we would call ‘rigging it’” she adds, laughing. “But I can’t say that I always had engineering on my radar or [that] NASA was on my radar.” Joeletta’s path to NASA began where you might least expect: in the back office of a Belk department store in her hometown of Greensboro, where she had part-time data entry work while at Dudley High School.

Joeletta came to the North Carolina School of Science and Mathematics to continue asking those questions. The experience was tenuous throughout, beginning with her application. Her mother, though firm in her desire for her daughter to exceed her own past, was hesitant in her support of Joeleta’s application. She hated to see her daughter leave home and worried that a working-class income would not allow for what she mistakenly thought would be an expensive, tuition-based experience.

“I think,” Joeletta says, “that in her mind she was thinking, ‘This. Ain’t. Free.’” But there was no cost to the family for tuition or room and board. Though Joeletta had convinced her mother to sign necessary documents as she moved through the application process, she balked at driving Joeletta to her final selection interview in Durham — and so she missed it. Letita Mason, NCSSM’s Director of Admissions, called Joeletta.

“Did you know you had an interview?” she asked her. “I did,” Joeletta said. “My mama won’t bring me.”  “Do you mind if I speak to your mother?”  “If you think it will help,” Joeletta said and handed her mother the phone. Years later Joeletta’s mother admitted that it was Joeletta’s own words that ultimately changed her mind. While “stomping around like a little kid,” complaining about missing the interview, Joeletta angrily said,

“You’re stopping me from getting the best education possible!” Soon after, her mother drove her to Durham for the second round of interviews. Joeletta was accepted into NCSSM. “Science and Math was difficult,” Joeletta recalls. She had always been an “in between” student, easily excelling in her coursework but always narrowly missing enrollment in her home high school’s AP courses.

NCCSM’s advanced coursework challenged her tremendously, but all along, she received the steady support of her once-reluctant mother, her father, and her stepmother, whom Joeletta lovingly refers to as her “bonus mom.” Mason was there for her, too. Her words of encouragement and generous acts of kindness are among the most cherished memories Joeletta has of her time at NCSSM. NCSSM, Joeletta says, “really taught me to never give up. ‘I’m going to figure this out. Whatever I need to do, I’m going to do it.’ It really gave me the tenacity to stay with it, to learn to work hard and dig deep.”

She came away with something else, a guiding principle that she carries through life: “Get into a ready state.”  “I don’t feel like I was fully ready for Science and Math,” Joeletta explains, “but it taught me the importance of getting ready. If I knew Science and Math existed, then there probably could have been some things I could have done in middle school to prep me.”

It’s hard to escape the presence of NASA at North Carolina A&T, particularly for those in the school’s engineering school, where Joeletta, captivated by “the simplicity of putting two circuits together and watching a light bulb light up,” settled in post-NCSSM after dabbling in a few other fields of study.

A significant portion of the engineering school is housed in McNair Hall, named in honor of physicist Ron McNair, a graduate of A&T who sadly was aboard the space shuttle Challenger that, like many other young kids in America, Joeletta watched disintegrate live on TV in her middle school classroom. But NASA wasn’t a direction she was considering.

“To be honest,” Joeletta says, “I always thought to myself, ‘I’m not that smart.’ You think of NASA as being the place where the really, really smart people work, and you don’t process that it could even be you.”

Lockheed Martin seemed a more likely employer. They aggressively recruited A&T’s engineering graduates. Joeletta thought it likely that she, too, would go to work for them. But a corporate logo of a NASA contractor in the university’s career services office upended her assumptions. Within the A of the United Space Alliance’s USA logo was an image of the space shuttle pointed skyward.

“I’d never heard of United Space Alliance a day in my life,” Joeletta says of the spaceflight operations company contracted by NASA to, among other things, manage operations of the International Space Station. But the image of that shuttle, its bold shape contributing to the stylized A, intrigued her. She signed up for a local interview. USA flew her to NASA’s Johnson Space Center in Houston for a second interview.

From the ground up

Within weeks of graduating from college, Joeletta was working in Houston for United Space Alliance as a flight controller for the space station, one of humankind’s greatest engineering marvels. She was there as the first component was placed in orbit in 1998. Her work placed her alongside veteran NASA employees and carried her to Moscow and Star City in Russia where she worked with her Russian counterparts (who, along with Japan, Canada, Europe, and the United States are Space Station partners) to develop tracking programs for the station’s inventory.

After a number of years with NASA contractors, and eager to move closer to her training as an electrical engineer, Joeletta transitioned into NASA itself as a flight engineer in the electrical power systems group focused on the space station. The optics of the job were very similar to the mental image many Americans have of NASA employees: men and women in front of rows of monitors wearing headset mics, listening to voice loops and manipulating through keystrokes the most expensive single object ever created.

The only real difference, Joeletta says, between her day-to-day experience and the classic flight controller image was that there was “no white shirt, no pocket protector.” Inevitably, a run at the stars herself crossed Joeletta’s mind. She flirted briefly with the idea, but soon realized she wasn’t suited for space travel. “I learned about everything that the astronauts have to go through [in their training],” she says, “and decided I was very content staying on the ground.” And there was something else, too: “I didn’t want to learn how to use the space toilet.”

NASA encourages its employees to develop professionally and personally by participating in “stretch” assignments where they cross-train in fields outside their focus area. Joeletta chose the Office of STEM Engagement, an outreach effort to enhance student participation in STEM fields and deepen the public’s understanding of NASA’s mission.

“Honestly, I fell in love,” Joeletta says of trying on the new role. “It was amazing to be a flight controller. To say you sent commands to space, that’s great. But to work in the Office of STEM Engagement and to say that you’ve been able to help change lives, that’s really different.”

Sometimes, it’s more than a single life that’s changed. For young people struggling to rise from challenging backgrounds, particularly those from minority and underrepresented populations with whom Joeletta most closely worked, a career with NASA can change the trajectory of generations that follow.

“That, to me,” Joeletta says, “was more powerful.” She moved into the new role permanently. For a while, Joeletta wore two hats — that of Program Manager for NASA’s Minority University Research and Education Project, and then later as Program Manager for NASA’s National Space Grant College and Fellowship Project, also known as Space Grant. It’s that latter role in which Joeletta is now engaged full-time, working to further broaden NASA’s reach, though she just began a new “stretch” assignment focused on streamlining NASA’s Office of STEM Engagement operations in California. The completion of a doctorate in business administration is just around the corner as well.

From tinkering with broken things in Greensboro, North Carolina, to a missed interview at NCSSM to a career with NASA, the unexpected but exciting arc of Joeletta’s life is sometimes difficult for her to grasp as fact. It could have gone in any number of directions; What if she hadn’t yelled at her mom? What if Mason hadn’t called? What if she had been looking the other way as she passed the United Space Alliance logo in her college’s career services office?

“One thing that’s always surreal for me,” she says, “is when I’m doing a speaking engagement and they do this introduction, they do my bio, and I’m like, ‘Wow! Who is that? I’d like to meet her.’ I’m the daughter of a sharecropper, you know, who basically told me to get the best education possible. I never even fathomed that it would take me to NASA.”

Editor’s note: Joeletta’s mother eventually went back to school, first through the community college system to get up to speed, then to North Carolina A&T, where she graduated soon after Joeletta.