Power of the mind 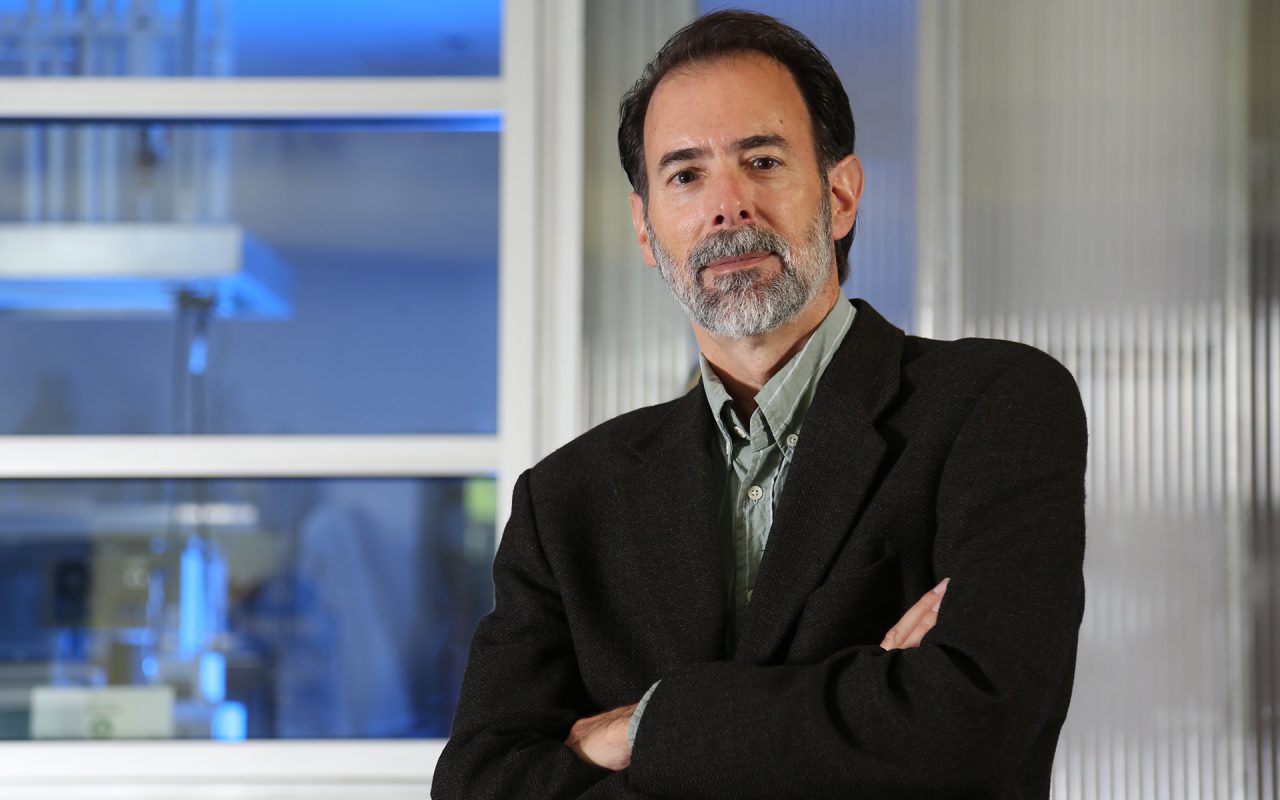 Ben Bahr, the William C. Friday Chair and Distinguished Professor of Microbiology and Biochemistry at The University of North Carolina at Pembroke, has been recognized as the 2017 Oliver Max Gardner Award winner by the University of North Carolina Board of Governors. The award – the highest honor given by the University and established by the will of former Governor O. Max Gardner – recognizes faculty who have “made the greatest contribution to the welfare of the human race.”

Bahr’s work is critical if researchers are going to stem neurological diseases. In America, there are more than five million people living with Alzheimer’s – a number that could rise to as high as 16 million by 2050. Despite his international reputation as one of the world’s leading experts on neurodegenerative diseases, Bahr knows that it’s going to take the work of many researchers across the globe to overcome conditions such as Alzheimer’s.

“I’m always like a little kid when it comes to brain research and I tell students in the lab to fire up your creativity cause it’s going to take everybody’s ideas of chipping away to solve this problem,” Bahr said. “Just like my dad was part of the huge group of engineers and mechanics that was part of the space program that got people walking on the moon, it’s going to take just as many, if not more, scientists to continue working to solve this terrible disease of Alzheimer’s, because the brain is just as complicated, if not more, than the universe.”

Bahr’s research led him to identify a unique class of cathepsin B-enhancing compounds that could slow down or even reverse the course of Alzheimer’s disease by speeding up the removal of abnormally accumulating proteins. Elevation of the cathepsin B enzyme was recently shown by other groups to occur after exercise in monkeys and humans, correlating with improved memory. In addition, Bahr’s work on blast-induced brain injury found subtle neuronal changes that may explain behavioral alterations in the absence of obvious brain damage.

“I’ve been very interested in helping people with dementia,” Bahr said. “There’s many types of dementia; Alzheimer’s is the most common form of dementia but there’s Parkinson’s, Huntington’s, ALS. The list is too long, affecting too many people so we’d like to know exactly how the brain works so we can know more about how memory disorders can occur.”

The work from his lab has been presented in 16 countries, has led to more than 140 scientific publications, and has resulted in patents for first-in-class drugs to treat neurodegenerative diseases.

Most recently his lab’s research contributions include:

Ben Bahr comes from a family with lofty goals. After all, his father was part of the space program that helped mankind reach the moon. So it should come as little surprise that Bahr wants to achieve something equally ambitious: find a way to eliminate neurodegenerative disorders, such as Alzheimer’s disease.

Bahr’s value to UNC Pembroke isn’t limited to his research work. Bahr is also a top-notch educator, training the next generation of researchers who will expand the breadth of study of the brain for years to come.

“When you see him interacting with his students you realize this man’s heart, is really the heart of an educator,” UNC Pembroke Chancellor Robin Cummings said. “He’s a researcher, he’s a scientist, he’s a faculty member but at his very heart, it’s about the student. And I admire that about him.”

Morgan Pate, a research assistant at UNC Pembroke, said she’s learned from Bahr in the classroom, as well as the way he mentors her. He encouraged her to present her research at a conference in New Orleans earlier this year – something she might not have done without the confidence boost he gave her.

“A lot of times at a smaller university, you don’t really get a lot of chances to do research, but here we’re able to work on high-caliber research and be able to work with someone who’s well-known in his field and who is respected by other scientists,” Pate said. “That gives us a great experience at having a good mentor and I’ve loved it every minute.”

“Dr. Bahr offers the experience of having a graduate mentor as an undergraduate but he is also excellent at ensuring that you feel like your work is valued,” he said. “He makes sure that every project you’re doing is relative to the central hypothesis of the lab and it allows you to take that feeling of accomplishment with you when you apply to graduate school.”

It’s not just his students whom he hopes to educate. Bahr does significant work in the community to raise awareness about neurological conditions.

A man of accomplishment

Bahr has received many prestigious honors during his career, including a Young Investigator Award from the International Society for Neurochemistry and the 2013 Governor James E. Holshouser Award for Excellence in Public Service given by the UNC Board of Governors. As an educator, he has earned the Outstanding Mentor Award from the Council for Undergraduate Research. He also received the 2017 UNC Pembroke Graduate Faculty Mentor Award. Bahr is the first UNCP faculty member to receive the O. Max Gardner Award.

“The opportunity to come to UNCP as the William Friday Chair was something I really wanted to take advantage of, because it was a dedicated biotech center laboratory that I could devote to Alzheimer’s research,” Bahr said. “We’ve branched off our work and have even more ideas of how we can treat Alzheimer’s even before it reaches the Alzheimer’s stage. Those people at risk for Alzheimer’s can start taking the drug we’re developing.”

University President Margaret Spellings noted that Bahr has been as honored by the Board of Governors several times for his accomplishments.

“He is known as a mentor and an advocate for students at UNC Pembroke, someone who balances world-class research with excellent teaching,” she said. “He has helped make UNC Pembroke a leader in undergraduate research, shaping a new generation of physicians and scientists. He’s a devoted member of the UNCP community, and his work has helped bring international recognition to Robeson County. It’s a proud day for Dr. Bahr and all of the students and colleagues who work alongside you.”