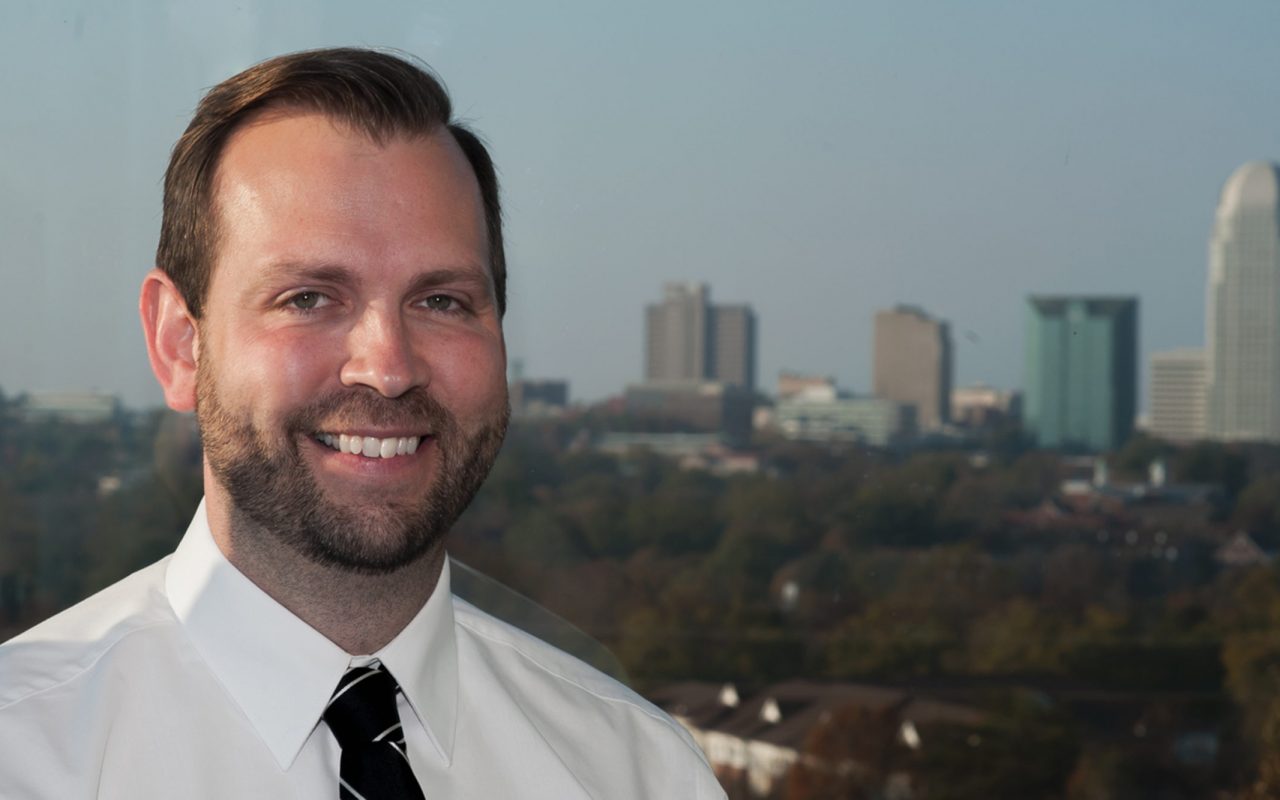 When reviewing all of the activities Joe Rick is involved with, one question leaps to mind – how does he have time to do it all? His exceptional level of service to the University of North Carolina School of the Arts and the Winston-Salem community earned him the 2016 Erskine B. Bowles Staff Service Award.

Rick has a full plate, serving as assistant dean of student affairs and director of residence life at UNCSA, as well as interim director of health services. But those duties haven’t stopped him from encouraging other staff, faculty and students to get involved in public service. Among his contributions:

“The state of North Carolina allows us to have 24 volunteer hours each year, and we eat that up,” Rick said. “The Big Help has been part of our routine since 2007. Big Brothers Big Sisters has been a big part of my life for nine years. So, I don’t really know how I fit it all in. You work until 5:15, you leave office for a 5:30 meeting that lasts until dinner, then dinner happens, then you run home and spend time with the loved ones.”

The Bowles award, named for the former University of North Carolina president, honors staff members who contribute outstanding service to their communities, making them a better place. It was established in 2010. The winner is selected by a committee from the UNC Staff Assembly and is someone who provides extraordinary assistance outside of normal job responsibilities throughout the campus and surrounding communities; displays selfless acts of giving to the campus and community events; and has achievements of a magnitude that greatly exceeds the normal accomplishments of a staff employee.

“Joe Ricks’ unanimous selection as the 2016 Erskine Bowles Award winner was based on three themes in his nomination package,” committee chairman Pernell Bartlett said. “First, he served others consistently, spanning more than 10 years. Second, his service impacted the lives of the young and underserved in the community. Third, he was selfless and tireless in his efforts. Whether he was coaching, mentoring, walking or building, Joe was always serving others.”

UNCSA Chancellor Lindsay Bierman said Rick has been a standout member of the team ever since he arrived on at the university.

“Joe’s a rock star on our campus,” he said. “He champions our institutional vision to develop citizen-artists who will transform their communities through creativity and compassionate service. His mentorship of our students and staff creates a culture of empathy, trust and respect for all. We’re thrilled and proud that he has brought this honor to the ‘School of the Cool.’”

Helping at a young age

Rick’s nature is to help others, even from a young age, so it took him by surprise when he found out he won the award.

“Volunteering has just always been a part of my life, my daily routine, so I don’t know anything different,” he said. “Being honored with this award comes down to years of serving others. I’ve never been a spotlight-type of guy. It’s been very humbling, but motivates me to spread the word and encourage others to join in.”

Rick said helping others evolved naturally while growing up in the tiny town of Church’s Ferry, North Dakota, where the population was only a few hundred and the entire town only had two elementary school teachers. Rick said when he was in the third grade, he and some friends began visiting some of the town’s elderly widows to make sure they were doing all right.

“My mom would get phone calls from these elderly women to thank us for stopping by to see them,” he said. They were in tears. Knowing now as an adult that at the age of 7 or 8 that I had that big an impact on people’s lives is just powerful.”

Volunteering with organizations like Big Brothers Big Sisters is a natural extension of Rick’s desire to help children.

“I’m drawn to a population of young people who may just have one parent in their life, who may lack some stability, who may need that coach in addition to their parents,” he said. “Many kids lack a male role model in their life. I’m in the wonderful position to be able to motivate them in a positive way.”

Emmanuel Lewis, a junior at North Forsyth High School in Winston-Salem, is one of the young people who has benefitted from Rick’s attention as his little brother in the Big Brothers Big Sisters program.

Lewis, 16, has been paired with Rick for seven years.

“Joe means a lot to me,” Lewis said. “He shows me what I need to do and what I don’t need to do. He’s had a big impact on my family. Winning the award means a lot, because it’s somebody recognizing he’s a good person.”

The two attend Wake Forest football and basketball games, and Rick helps Lewis with his homework and study skills. Rick occasionally brings Lewis along to some of his other volunteering efforts.

In fact, the mentoring experience has been so positive that Lewis is now looking to become a Big Brother to someone younger under Rick’s tutelage.

“I think Joe is one of my own real brothers,” Lewis said. “We’ve been through a lot together.”

Rick’s impact with the organization goes beyond helping Lewis, such as being a part of the Bigs Council, which recruits new Big Brothers and Big Sisters to volunteer.

“Without adult volunteers like Joe Rick, Big Brothers Big Sisters Services would not be able to serve almost 700 children in Forsyth and Davie counties. He’s making a difference in children’s lives, and we’re fortunate to have him on our team,” said Shawan Gabriel, president and CEO of Big Brothers Big Sisters Services. “As a two-time Big Brother and founding member of the Bigs Council, Joe is an invaluable asset to our agency and the community.”

Many of those who nominated Rick for the Bowles Award noted the leadership role he has taken on campus, working hard to keep up morale as well as getting other staff members involved in altruistic endeavors.

For example, he headed up the prize patrol committee for the Chancellor’s Cup Golf Tournament, which raises funds for the Janet B. Royster Memorial Staff Scholarship Fund. He also has organized campus lunch walks, competitive kickball games among the faculty, staff and students, and $6 lunches for staff on Thursdays at the UNCSA dining hall.

As part of the Big Help program, he helped create as a way for staff members to give back to the community, there are monthly service projects that allow the professional staff to bond and serve as a model to students. Service projects have included staff members decorating gingerbread houses at Mrs. Pumpkins, which were donated to children at Brenner’s Children’s Hospital; a canned food drive; a pen pal project with Lewisville Elementary School 5th graders and a pizza social with the class; a staff-prepared dinner for residents at the Ronald McDonald Housing; and care packages for four adopted soldiers stationed in Iraq.

“Joe has shown constant support for the UNCSA community and the community at large by tirelessly volunteering his time,” said Leslie E. Kamtman, chairwoman of the staff council at UNCSA. “Even if Joe cannot participate in a community event, he offers ideas and resources to help. Joe is the epitome of what going above and beyond is all about.”

Rick earned his doctorate in Educational Leadership at Appalachian State University after earning a master’s in counseling from Wake Forest University. He earned his bachelor’s in biology from the University of Jamestown.