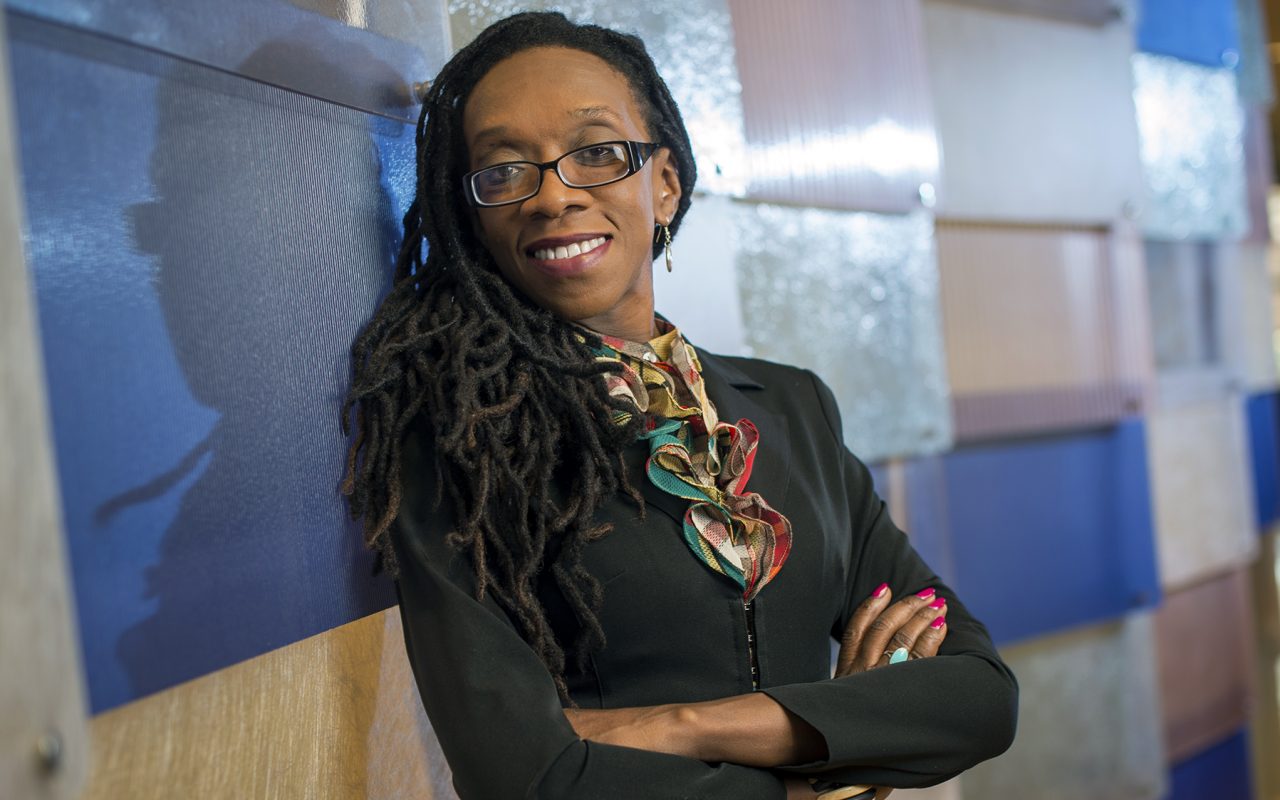 Because Kimberly McLaughlin-Smith’s lessons in diversity on the University of North Carolina Wilmington campus are so engaging, Victor Malo-Juvera asks her to speak to his English education class every semester.

But he didn’t know just how effective McLaughlin-Smith’s impact was until he ran into a former student at a party.

“I met a student I had five years ago who is now teaching middle school and asked if what I’m doing helps them as a teacher,” he said. “The first thing out of her mouth was about Kimberly and the diversity discussion they had. The student was white and had grown up privileged and had never considered anything about diversity past color.”

McLaughlin-Smith serves as the Diversity and Inclusion Specialist for UNC Wilmington, a role that she said found her rather than the other way around. Working on a campus with a predominantly white student body, McLaughlin-Smith teaches students – as well as faculty and staff – that understanding diversity is about more than race. Factors include common diversity traits, such as religion and sexual orientation, and less common ones, such as socio-economic class and geographical origins.

“We have a very colorful history in this town as it relates to diversity, inclusion and social justice issues, which makes for interesting work on campus,” she said. “Creating a more visually diverse look on campus, that’s always a work in progress. One of the things I like to do is looking at the spectrum of diversity, those components and intersections.”

McLaughlin-Smith noted that diversity is not always something that can be seen, so part of her job is to pull back layers and keep everyone engaged, so they realize they have a stake in the conversation.

“Everyone is a person with a diverse identity, and those intersections matter,” she said. “There’s diversity inside any group of people. There’s no group that’s monolithic.”

McLaughlin-Smith never set out to work as a diversity facilitator. She attended North Carolina Central University and planned to pursue a degree in journalism. While serving as an apprentice to Dudley Flood, who gave diversity seminars at the YWCA, she decided to change paths.

“I always said diversity education found me before I found it,” she said with a chuckle.

Before long, McLaughlin-Smith was serving as a consultant about diversity to private industry as well as the Wilmington public school system. While serving as the racial justice director for the YWCA of Lower Cape Fear, she helped create a community-wide program called “Wilmington in Black and White” in collaboration with the District Attorney’s office and UNC Wilmington. She was hired by UNC Wilmington’s multicultural affairs office in 2007.

Since then, she has helped facilitate diversity discussions among staff during orientations, as well as in various classrooms on campus when professors invite her to contribute to their discussions.

“Month after month after month, the evaluations tell us that Kimberly’s module was the highlight for so many of our new employees,” Grimes said. “They’ll say ‘Kimberly was amazing.’ She engages people in such a way that they experience a safe environment where they can grapple with new ideas and new information. It’s almost like you can see a shift in people within that module.”

Grimes said McLaughlin-Smith will challenge those in the module, but not in a way that’s threatening. Instead, she uses experiential exercises to convey her lessons.

UNC Wilmington faculty members said McLaughlin-Smith has become a valuable resource to facilitate diversity discussions, which can sometimes be a difficult subject to broach during class.

Jessica Weinkle, an assistant professor in public and international affairs, teaches a course in public policy, which requires an understanding of how policy is made and people’s perspectives in making it. Weinkle said she was “captivated” by McLaughlin-Smith’s lecture during her orientation training.

“The way she spoke about diversity and inclusion was far broader than I had ever heard,” Weinkle said. “When I was developing my syllabus for the first time, I asked her to come in and do an exercise that would impress upon the students how people are different beyond just skin color. It went over really well.”

Weinkle said she felt she had grown up privileged until McLaughlin-Smith asked the class who had ever had to go without a meal, and Weinkle stepped forward.

“She was trying to point out that diversity is subtle and beyond skin-deep,” Weinkle said. “Her point was that students have a diversity of experience. In my classroom, some have military backgrounds, some are rich, some are poor, some have had health issues. So everyone has different backgrounds – while a lot of us are white, what we’ve come to expect on how people view us is very different, based on our experiences.”

Weinkle said when she first started working at UNC Wilmington, she was concerned how to engage her students in race and politics. McLaughlin-Smith helped her to come up with ways to lead the discussion.

Malo-Juvera, originally from Miami, wants to impress upon his students that they will have very diverse classrooms when they become teachers. One of his courses deals with multicultural young adult literature, and he’s invited McLaughlin-Smith to teach the students about varying cultural concepts of beauty.

McLaughlin-Smith said her job is constantly evolving as views of diversity change. Often, she said, political correctness can hamper a discussion about diversity rather than assist it.

“There are a number of faculty members on campus who say they are uncomfortable with facilitating diversity conversations and activities in the classroom,” she said. “That’s an area where they want to get it right, and the fear of getting it wrong has people at a stand-still. So, this role is well-received on campus. My role is to unload the weaponry of conversation.”

McLaughlin-Smith also continues to serve the community beyond the campus. She broadcasts a weekly music program called “Reggae Redemption,” using the on-air nickname of “Night Nurse.” McLaughlin-Smith said the program goes far beyond the genre of reggae, however, incorporating music from across the globe. It’s another way to be inclusive, she said, by exposing her listeners to a plethora of cultures.

McLaughlin-Smith said her challenge is to expand the topic of diversity to a point where there’s no longer a need for discussion, because people will have an understanding of diversity and inclusion.

“I’m in a business that I hope to be put out of one day, because I don’t want there to be a need for a diversity and inclusion specialist to help people get to a place where we have interaction across all intersections,” she said. “I’d love for there not to be a need for this work, but I don’t know if I’ll see it in my lifetime.”