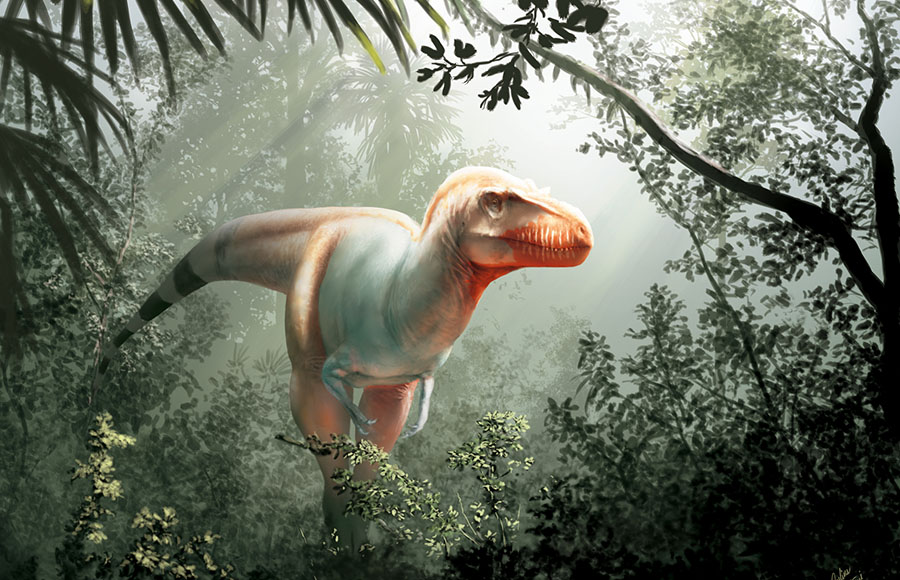 Jared Voris ’16 had his hands on a ferocious beast — and lived to tell about it. In fact, this Appalachian State University alumnus has been called on quite a few times to tell his tale.

While studying some skull fragments for his master’s thesis at the University of Calgary in Alberta, Canada, Voris identified a new species of tyrannosaurid dinosaur, and his findings have received worldwide attention from news media.

Voris, who is now pursuing his Ph.D. in geology and geophysics at the University of Calgary, said Thanatotheristes degrootorum — whose genus name translates to “Reaper of Death” — was a predator at the top of its food chain that lived approximately 79.5 million years ago. It is Canada’s oldest known tyrannosaur and was an “imposing creature,” Voris said, measuring about 30 feet long and 8 feet tall.

Dr. Andy Heckert, professor in Appalachian’s Department of Geological and Environmental Sciences, said, “Jared has a great combination of intellect, interest, curiosity and creativity that served him well at Appalachian. As a first-year student, he rapidly developed an acumen for finding and identifying fossils. By his senior year, he was the unquestioned leader of my large undergraduate research team.”

“At Appalachian, the geology professors focus on giving undergraduate students high-level research experiences, which help prepare us for graduate school.”

Jared Voris ’16, Appalachian alumnus and Ph.D. student at the University of Calgary in Alberta, Canada

His skills in the lab helped Voris realize the fossils — which had been discovered by a farmer and his family almost 10 years ago and stored in Alberta’s Royal Tyrrell Museum — differed from other tyrannosaur bones he had studied, which initiated the identification of the new species. “There were vertical ridges lining the dinosaur’s jaw — something we hadn’t seen before,” he said.

The discovery is significant because it fills in a gap in the evolution of tyrannosaurs, Voris said. “This pushes the window into Alberta’s tyrannosaur species back about 2.5 million years from what we originally understood,” he said.

Alberta is known within the paleontology community for its abundance of tyrannosaur remains, Voris added, and it’s been 50 years since the last new species in Canada was named.

Voris determined there was much more work to do on the subject and decided to make it the focus of his Ph.D. research. He led an article about the evolution of tyrannosaurs that was published in the scientific journal Cretaceous Research earlier this year.

His interest in dinosaurs began when he was growing up in Brevard, and Voris said he chose Appalachian for its paleontology program.

“Dr. Heckert provided me opportunities and research projects, and he helped me understand what is expected in a career in paleontology. At Appalachian, the geology professors focus on giving undergraduate students high-level research experiences, which help prepare us for graduate school,” Voris said.

When he completes his Ph.D., Voris hopes to become a professor or museum curator. “I’d like a position that provides the opportunity to do hands-on research,” he shared.

Read more about this exciting discovery and Appalachian’s Department of Geological and Environmental Sciences.