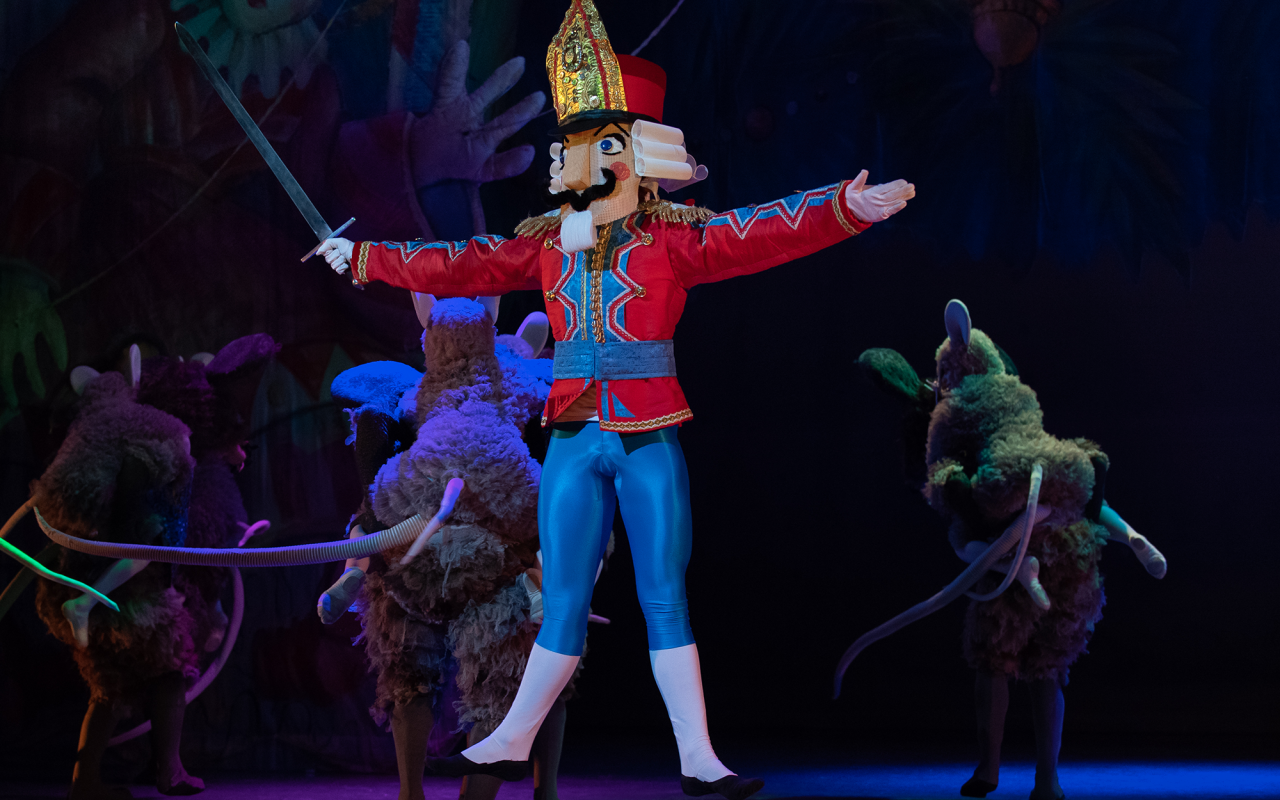 Catamounts are a rare breed, even in the most remote of locations, but experts are confident that, on Thanksgiving Day, 2019, more than 500 of them will gather at the corner of 77th St. and Central Park West. From there, they’ll wind their way downtown for more than two and a half miles until they arrive at Macy’s.

For the second time in five years, the Western Carolina University Pride of the Mountains Marching Band will have a premier spot in the annual Macy’s Thanksgiving Day Parade. Few bands have this honor bestowed on them even once; this year, the Pride of the Mountains is one of only eleven marching bands that will be bringing the beat. Appearing twice in such a short span of time is just shy of a miracle on 34th Street.

For millions of Americans, watching the parade on television is an annual rite of passage. In some households, it’s the soundtrack for the day’s meal prep. In others, it plays out as family members carefully (or indiscriminately) spread out boxes and boxes of holiday decorations in staging areas across the living room floor. For everyone who watches, the grand spectacle of giant inflatables, Broadway performers, festooned floats, and blazing hot marching bands strutting and dancing their way through Manhattan is the official kickoff of the holiday season.

North Carolinians craving the intimacy of in-person holiday rituals don’t have to make the trip to Manhattan. Other UNC System institutions have their own traditions that brighten the holidays far closer to home.

The Gift of Dance

When the “Waltz of the Flowers” unfolds during the UNC School of the Arts production of The Nutcracker, audiences sit enraptured … and with good reason. The piece is a tour de force.

The choreography, set to Tchaikovsky’s instantly recognizable music, brings together the corps de ballet (the group work in ballet). For more than eight minutes, twenty dancers weave in and out in an intricate fusion of music, color, and movement. Awestruck members of the audience see the magic.

When UNCSA School of Dance Dean Susan Jaffe watches from the seats, she sees the magic too … but she also recognizes the hard work and intense professionalism it takes to pull such a performance off.

“The choreography is on par with what you’d see in professional productions. It is very challenging. All of the synchronized movement requires a tremendous amount of rehearsal, and the quality of the movement is every bit as important as the synchronized movement in unison,” she explained. “The scene requires dancers to have lot of time and spatial awareness, not to mention the stamina and strength to get through the whole piece without falling apart.”

The school’s annual production of The Nutcracker is a crowd pleaser that has been a part of North Carolina’s holiday traditions since 1966. Not surprisingly, it is also the most significant learning outcome of the year in the school’s ballet division. And every year since she’s been on the faculty, Jaffe has been stunned by the “Waltz of the Flowers” and the rigor, talent, and dedication the school’s students bring to the piece.

“That particular number is the measurement of how good our school is,” she chimed proudly. “It takes the whole corps to show the strength and depth of the entire school. It shows how technically sound they are, how musical they are, how articulate they are, how strong they are … they transform themselves into the physical embodiment of the music, and when I see that piece done really well, I feel so proud of the school.”

Mearns will become the Sugar Plum Fairy and Walker the Cavalier Prince for two performances only: 7:30 p.m. on Wednesday, Dec. 18 and Thursday, Dec. 19. [Enthusiasts should be sure to pounce at this opportunity quickly, as tickets to these performances don’t hang around for encores.]

Aesthetics alone, however, don’t quite explain why The Nutcracker brings families together, year after year. These performances dig deep into the same holiday spirit that fills the early winter months with cheer.

“There are plenty of reasons why The Nutcracker is a perennial favorite. In addition to the lovely music and swirl of color that’s just fun to watch, the story shows above all that love is more than skin deep,” Jaffe mused. “Clara is able to see that there’s a humanity—something special—about the nutcracker, and her love for him breaks the spell. The nutcracker doll turns back into a prince. As a gift in return for the affection she shares, he takes Clara around the world and, together, they discover all the magic that the world has to offer.”

The gifts on display in the UNCSA’s production aren’t limited to plot details, either. Each year the school reserves a performance especially for underserved audiences. Adding to the usual excitement, during these shows the curtains actually stay up through the intermissions, giving the audience a rare glimpse of the magic that happens backstage. Assistant Dean of Ballet Jared Redick—who also directs the ballet—interacts with the crowd, encouraging them to applaud wildly and explaining why ballet lovers are prone to shouting “Bravo!” and “Brava!” In a sense, these unique shows fully immerse the fixated children into the enchantment of dance.

It’s no surprise that The Nutcracker brings families together: it appeals to children of all ages, wowing parents and kids alike. Last year, more than 14,000 people saw a UNCSA performance of the ballet. This year, 100 new booster seats will ensure that even the youngest of enthusiasts will get to enjoy “the best seat in the house.”

Jaffe is quick to point out that all of the profits from those ticket sales go toward scholarships. Attending The Nutcracker isn’t merely a few hours’ worth of entertainment; it helps to attract some of the nation’s brightest talent to the School of the Arts and to help financially struggling students fund their education.

In this way, The Nutcracker is one of those perfect holiday traditions–it keeps giving throughout the year.

The holiday season starts early for WCU and UNCSA. It takes many, many weeks of prep-work and practice to perfect a performance that might only last a couple of hours.

At The North Carolina Arboretum, the season starts just as the leaves begin to turn. In September, staff begin the work of installing more than a half a million lights that will transform the autumnal mountain landscape into a luminous winter wonderland during the arboretum’s Winter Lights holiday show.

Winter Lights opened on November 22, and every evening from 6-10 p.m. through Saturday, January 4, 2020, visitors will stroll through nationally acclaimed gardens that have been transformed into an exquisitely designed light show. In addition to the glowing landscape, the family-friendly event includes holiday-themed interactive games and activities, live entertainment, and festive food and beverages available for purchase (including hot cocoa, s’mores, wine, and beer).

This year, the Arboretum will be launching its new “Magical Maple” display, in which Western North Carolina’s native red maple trees spring to life through lights, music, and art. Many fan favorites will also return this year, including the arboretum’s signature 50-foot animated tree and illuminated Quilt Garden, the festive Rocky Cove Railroad garden scale model train, and the animatronic children’s program, “Storytime at Woodland Cove.”

Last year, 40,000 visitors experienced Winter Lights, and organizers fully anticipate that 45,000 will visit this year. They don’t just come from North Carolina, either; the event has become nationally recognized and has attracted visitors from all 50 states and 10 other countries.

“Winter Lights has truly become a signature holiday event for Asheville and the entire Western North Carolina region,” said George Briggs, executive director of The North Carolina Arboretum. “Walking through the arboretum’s gardens at night and seeing our landscapes covered in more than half-a-million lights brings a whole new light to the natural world during the holiday season. It is really a unique experience that visitors have enjoyed coming back to year after year.”

These numbers make Winter Lights the arboretum’s most significant fundraiser of the year. Just as importantly, the crowds have a significant economic impact on the region and throughout the state.

The arboretum has collaborated with 50 North Carolina companies to produce the event. Furthermore, the income from ticket sales has supported the hiring of eight year-round horticultural and maintenance workers and a slew of seasonal workers, whose contributions are critical to producing the show. The benefit that this brings to the arboretum and a region—both of which were hit hard during recession—is significant.

So, while Winter Lights is certainly a spectacular, fun-filled holiday celebration, it is also critical to the arboretum’s contributions to the UNC System’s goal of maximizing economic impact and increasing the “investment of time and resources in strengthening North Carolina communities” as outlined in the University’s Strategic Plan.

Just as critically, the event contributes to the arboretum’s educational mission in a variety of ways. In the “Storytime at Woodland Cove” exhibit, animatronic creatures help children learn all about where animals go and what they eat in the wintertime.

Elsewhere, the lighting scheme on 40 tall trees highlights structural form. Because deciduous trees, such as the white oak, black gum, American beech, sugar maple, and others, lose their leaves in the winter, identification requires the ability to look at and analyze form as an identifying feature.

“In general, we use nature as our jumping off point for design,” explained Senior Director of Mission Delivery Clara Curtis. “We’ve created a specially designed forest and a variety of creatures, including a blue heron, a frog, and butterflies. Our bonsai curator has designed shadow light boxes to highlight native species. The event spotlights the region’s cultural history as well, most notably in the quilt garden, which uses light to create a traditional quilt block pattern.”

Perhaps most importantly, the event appeals to people who wouldn’t otherwise come to the arboretum.

“The spectacular lighting, fun activities, and all-around festive atmosphere attract many first-time visitors during the holiday. Many will come back in other seasons to enjoy the plants, flowers, and wildlife we offer,” Curtis said. “The event is helping us to build a diversified audience. It has put the arboretum on the map for people to enjoy year round.”

All of this is accomplished with minimal impact on the environment. Despite filling the landscape with over 500,000 lights, the electrical bill during the Winter Lights months is only slightly higher than it is in other months of the year, all because the arboretum has committed to using LED lighting.

This too adds to its educational mission, giving the arboretum a colorful and song-filled excuse to tell the story of how it has improved energy efficiency by 80 percent simply by changing bulbs. This commitment to sustainability will ensure that Winter Lights remains a staple North Carolina tradition for many years to come.

The Pride of the Mountains … and All of NC

As we watch the WCU marching band wind its way down Central Park West; or gaze in wonder at a Sugar Plum Fairy pirouetting at dizzying rotational speed; or warm our hands around hot cocoa during a stroll through a brilliant winter landscape; or soak in the festive sights and sounds to be had at every UNC System institution this holiday season, North Carolinians should pause to reflect, with pride, on how their public universities don’t just educate enrolled students. They brighten our world with music, color, and movement.