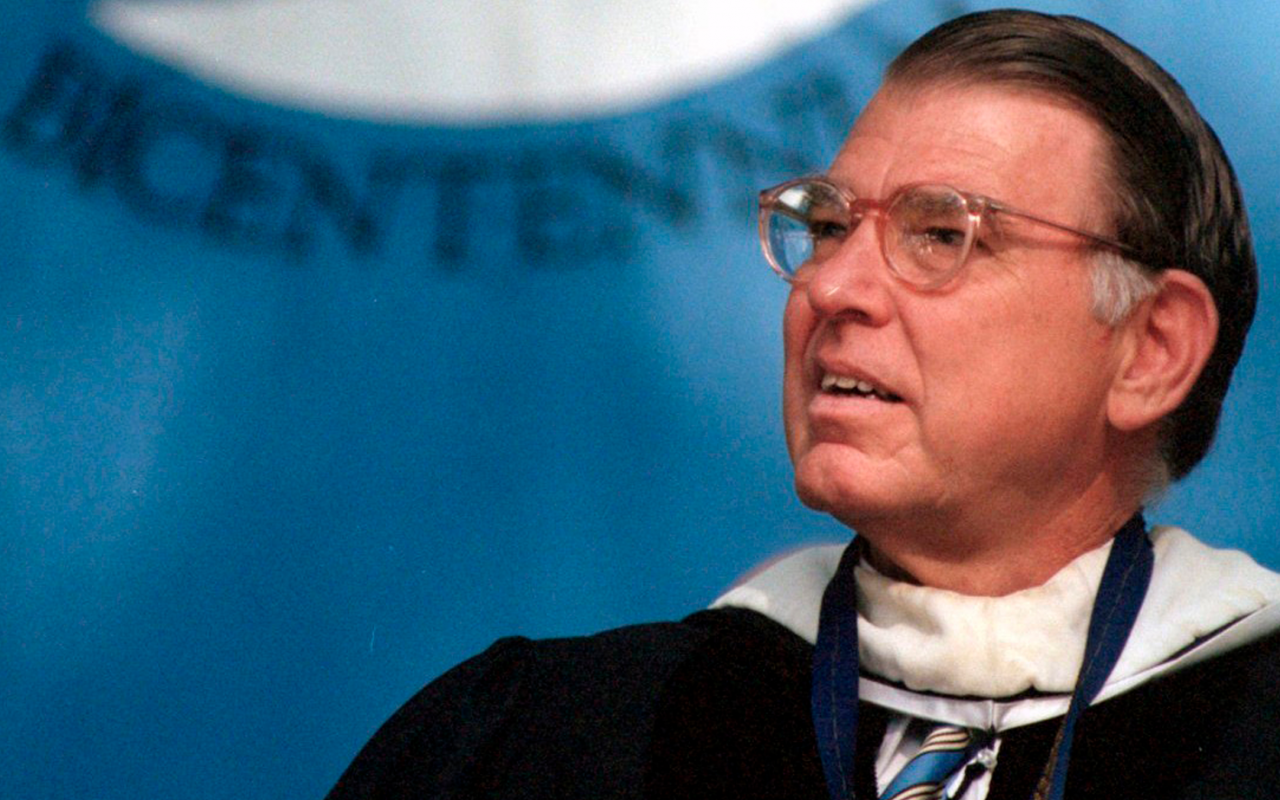 “I rise today to honor and to celebrate the life of C.D. ‘Dick’ Spangler, a great North Carolinian who passed away this week. The true mark of a great man, a great contributor to our society is the fact that there’s several acts in that individual’s life. There’s no one single attribute to which to ascribe the contribution and Dick Spangler was such a man. In that first act, Dick built an impressive wealth at the time making him one of the wealthiest individuals in this country.

“The family construction business, the real estate business, the son of a Charlotte contractor and real estate investor. Dick attended Woodbury Forest, University of North Carolina, Chapel Hill and the Harvard Business School. After serving two years in the Army, he moved back to his native North Carolina to work at the family business, C.D. Spangler construction. 1973 while continuing to serve in the family’s construction company, Dick became the chairman of a little bank at the time, the Bank of North Carolina. Subsequently elected a Director of NCMB, which would eventually be sold to Bank of America.

“Although he was a brilliant businessman, in my mind Dick Spangler will best be remembered in our state for his commitment to education and what it means for lifting individuals out of poverty, giving them a path for learning, and expressing their individuality. He did this by advocating for a return to the emphasis on teaching the basics, higher salaries for teachers, programs for training high school principals for a very challenging job.

“The second act in the energies and personal contributions he made to it are what made Dick the remarkable man he was. During his time as President of the University of North Carolina system, a position he held for over a decade, Dick was laser focused on keeping North Carolina’s public university system affordable and low cost for all seeking post-secondary education.

“It’s because of his dedication so many years ago to low-cost tuition in the UNC system, a mission he pursued without a paycheck during his time as President, that current North Carolinians today receive an affordable great university education.

“Dick Spangler once said and I quote, ‘low tuition is not a gift. It’s an investment in these students and they go to work and they pay that back over a lifetime.’ The number of individuals who have chosen to do just that by making North Carolina their home after graduating from one of the UNC system’s great schools is a testament to that effort.

“He viewed leading the UNC system as one of the truly great jobs anyone could have. On the eve of his departure, he said when talking about the UNC system, ‘We’re on the side of angels, spending time with our students. To be with them is one of the great joys a person could experience. I live in a community that is vibrant, not asleep. It’s wide awake and there’s always turmoil because people are bright with viewpoints sometimes in conflict.’

“But for those who know the Spangler family and Dick’s commitment to the state, I’ll always remember Dick for his philanthropy and the commitment to bettering our state through his personal efforts and his personal giving. The C.D. Spangler foundation dedicated hundreds of millions of dollars over the past several decades to better public education in our state.

“Through this work over 120 distinguished professorships, proposed towards improving instruction in our public education were funded, providing generations of North Carolinians with the benefit of quality education. For those unfamiliar with the racial history of North Carolina schools, Dick Spangler was prompted by Swain v. Charlotte Mecklenburg schools, that seminal supreme court decision which said it wasn’t enough to simply say desegregation of public schools was the law of the land, towns needed to commit to it and follow through on educating minorities next to their white peers.

“It’s no exaggeration to say without Dick’s leadership in Charlotte during the 1970’s and 1980’s, racial desegregation of Charlotte schools might not have happened the way that it did. Serving as a national model for other communities grappling with racial tensions in their schools.

“Dick was so adamant about the fact that he decided not just to put his tremendous personal wealth to work but he put his time on earth to work as well. He ran to become vice chairman of the Charlotte-Mecklenburg schools in an effort to ease the racial tensions that existed at the time in Charlotte, North Carolina.

“Although he could have afforded to send his children to private school, he chose to lead by example and sent them to Charlotte Public Schools to prove what is obvious to us now but was seemingly so controversial at the time.

“Madam President, when I hear Dick Spangler’s name, there’s words I think of. Honest. He was never questioned about his honesty. Passion. Dick Spangler was committed to every effort that he joined into and he never sold it short. Opinionated. He made you listen, whether you wanted to hear it or not. Fair. He never let his wealth influence his outcome. Daring. He took on things that other people ran the opposite way from.

“Demanding. I’m not sure that I’ve been in many meeting with an individual that controlled your attention like Dick Spangler did, because he saw time as a precious thing, and he knew that we were limited on the amount that we would be here to use it. Dick Spangler used every minute of his life to make our state and this country better.

“Today I would like to extend my condolences and deep appreciation to his wife of 58 years, Meredith, to Abigail, to Anna, to Tom, to the extended family. Their loss is not only our state’s loss, but our country’s loss. I can feel confident, as I think Dick Spangler does today in heaven, that Dick did everything he could to set the example for every generation to come that you have to invest something to get something. And I, for one, am moved, inspired, and committed to live on that commitment.”

Read the comments from Senator Tillis:

“I had the privilege of meeting Dick Spangler 11 years ago, and since that first meeting I never left an encounter with him without learning something new. He loved North Carolina and the UNC system that he helped build into what it is today,” said Senator Tillis. “Dick truly was a mentor to me, and I want to offer my condolences to his wife Meredith and daughters Anna and Abigail. Even though he is no longer here, his advocacy will live on for decades to come and I am thankful for having some time to share with Dick Spangler.”

“C.D. Spangler, Jr. was a great North Carolinian, and he will forever be a giant of our state. He will be remembered as a gifted business leader, a compassionate philanthropist, and above all as a public servant who answered the call of the University at a critical time in its history,” said UNC President Spellings. “He believed in the power of education to change lives and transform a state, and he made those possibilities into reality through his life’s work. North Carolina is the prosperous, growing state that it is because of principled leaders like Dick. My thoughts are with his wife Meredith, and his daughters Abigail and Anna. This state will forever be indebted and grateful that Dick dedicated his life to public service, public education, and the state he loved so much.”