Robert Rucho, of Mooresville, NC, was appointed by the North Carolina General Assembly in 2017 to serve on the Board of Governors of the University of North Carolina System. His term will end in 2021.

Rucho serves on the Budget and Finance Committee and on the Audit, Risk Management, and Compliance Committee.

Rucho is a staunch supporter of the UNC System and recognizes the value of a quality education and its importance to the state's economic growth. He is an advocate for reducing student debt, graduating students within four years, and making sure capital projects funding is spent wisely.

Originally from Massachusetts, Rucho spent his entire career as a successful dentist, specializing in prosthodontics. He completed his general practice residency at Worcester Memorial Hospital. He has served as chief of dentistry at Carolinas Medical Center. He served as the president of Charlotte Dental Society, a trustee of the NC Dental Society, and treasurer of the American Dental Association PAC.

His passion for service extended into the political arena as well. He became state senator in 1997, representing the 39th District, a role he faithfully served for 17 years.

He is the recipient of the Order of the Long Leaf Pine Award, the Mecklenburg County Order of the Hornet, NCNFIB Guardian of Small Business Award, the National Foundation for Unemployment and Workers' Compensation UI Integrity Award, the NC Orthopedic Association Patient Champion Award, and the Architect of Tax Reform Award.

He received his bachelor's degree in biology from Northeastern University, a DDS from Medical College of Virginia, a certificate of advanced graduate study in prosthodontics from Boston University, and an MBA from the University of North Carolina at Charlotte.

"Whatever you choose as a profession, be happy with it. There's nothing worse than going to a job that doesn't make you happy. Never limit yourself. If you want to achieve something, be willing to do the hard work that is expected." 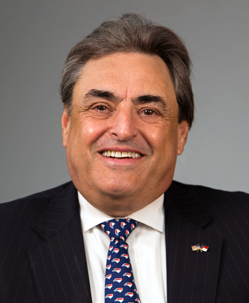